The Puppy Ate My NANO, Guest Post by Tirzah Goodwin

The Puppy Ate My NANO

This is my third year doing NANO. I've tried to learn from my earlier mistakes. I don't stress if I don't get the full 1,667 words each week day as long as I'm caught up by Sunday night. But I still make some rookie movies, such as getting a puppy the month before NANO.

I’ve taught myself to hold the puppy with my feet while I type furiously with my fingers. Fred tries constantly to kill my laptop by jumping on it. He really knows how to kill a writing spree but I love him anyway.

My other two dogs have survived previous NANO writing marathons. They curl up on the couch with busy bones and sleep. As long as I walk them once a day, the guys are willing to be ignored for thirty days. And some deli turkey couldn’t hurt. Deli turkey can buy you lots of forgiveness.

The puppy doesn't understand. Of course, he also doesn't understand not to pee in the house and why dryer lint can't be eaten as an after dinner mint either. I'm not sure he's the brightest bulb. I tell him all the time that he doesn’t have to be cute and smart so pick one. Fred better hope he turns out cute though because smart is off the table.

Earlier today I was nanoing my fingers to the bone, trying to catch up from a week’s worth of distractions. I hit a thousand words. I was almost where I should be. Then my computer blinked up a warning "low power." I plugged it in and kept typing.

A few minutes later, my screen went black. I thought, "Whatthebleep!" The knob was in the hole. I was plugged in. I followed the cord back to the wall. And what do I find? A brown and black face staring up at me with the cord dangling from his mouth. I guess he was tired of waiting for his walk.

I only lost 1,100 words. I really love Fred. He still lives. I woke up the other two dogs and we went on a slow walk around the block. My other male dog yawned the entire time, he kept glancing back at me with a dirty look. It's November, he's allowed to nap all he wants on the couch and I was breaking the rules. I shrugged and told him to blame Fred.

I had to crack open the new pack of deli turkey to get myself out of the doghouse.

I get the computer going again, sit down and try to type. No words come to mind. My mind is a blank slate.

Crap. I guess if this continues, I suppose I can say the puppy ate my NANO. Do you think anyone will believe me?

Fred's licking my toes and I really need to find something to write. Maybe I should let Fred write something, he seems to be the only one with any bright ideas tonight.

But I don't think he's interested, he just yawned.

I guess I'm on my own but what NANOer isn't'? 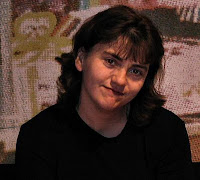