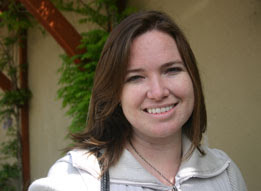 Mary Elizabeth Summer is a Portland, Oregon-based writer who spends her days writing training materials for various companies and her nights racing pell-mell across the keyboard after her rampaging imagination. She writes novel-length stories with occasional forays into shorter fiction, and she writes for young adults, except for when she doesn't. She has a BA in creative writing (she BSes everything else), and she haunts bookstores for fun. Her current writing project is a young adult novel about a girl on the grift. Non-writing interests include volunteering at a horse-therapy program for autistic children and learning the fine art of parenting from her newborn daughter.

WOW: Congratulations on placing as one of the Runners Up in our Spring 2010 competition! What inspired you to enter the contest?

Mary Elizabeth: Thank you! I was very honored to be chosen from among such talented writers. Actually, I was inspired to enter the contest when I read that I could receive a critique of my entry. I didn't expect to actually place in the contest. I was happily surprised when I did, but also happy to get a professional opinion about the story.

WOW: Glad your expectations were exceeded! Can you tell us what encouraged the idea behind your story, "Of Crepes and Constancy?"

Mary Elizabeth: It's kind of a funny story. My writing group decided to try a variation of the exquisite corpse exercise in which each of us put two sentences into a hat and then draw two sentences out. One sentence was to be used as the first sentence of a story, and the second sentence was meant to be the last sentence of the story. The first sentence I drew was "How many times can you burn a crepe before it really does mean something?" In my original version of the story, I managed to end it with the second sentence, but in the revision process, I had to cut it, because it didn't quite work. As for the substance of the piece, at the time I wrote it, I was noticing a pattern in the relationships of people around me--a certain sort of insincerity that led to mind games and dissatisfaction. I had actually meant it to be a comical story, but it didn't turn out that way. Funny how characters sometimes take a story and run in completely the opposite direction with it.

WOW: For writers who may be interested in what you do for a living, could you describe what it’s like writing training materials for various companies?

Mary Elizabeth: It can be challenging at times. I have to take a bunch of information about something I know absolutely nothing about and shape it in a way that makes sense to someone else who knows nothing about it so that they learn. It involves a lot of adult learning theory and subject matter experts and ridiculous budget constraints and unrealistic turn-around times and blah blah blah corporate blah. It is a pretty sweet job, though. I essentially get to write for a living, which is the golden apple, right?

WOW: It sounds like a demanding but interesting job. How do you switch gears to write fiction at night? Especially with a baby in the house!

Mary Elizabeth: I'm always writing fiction, even when I'm not actively writing it. I write it in my car, in the shower, while I'm feeding my daughter, etc. I get an idea and I can't get it out of my head. When I hear songs on the radio, I think, "which character in my story does this song most relate to?" And that often leads me in new and surprising plot directions. So when I sit down to write at night, I'm mostly just recording all the stuff I came up with during the day. So there's not really a switching of gears, so to speak. I'm always in that gear, even when I'm working.

WOW: You're also working on a YA novel. Do you have any favorite YA authors who inspire you?

WOW: Switching gears at bit, can you tell about your volunteer efforts at a horse-therapy program for autistic children?

Mary Elizabeth: Well, I've been horse crazy since birth pretty much, and I thought it would be a good opportunity for me to be around horses while doing some volunteer work at the same time (I'm a big proponent of multi-tasking). But it turns out that the best part is bonding with the kids, not the horses, which totally surprised the heck out of me. One day we were on a trail ride (the boy was riding, and I was walking along side to make sure he didn't fall off), and the boy turned and smiled at me like I was really special, like I was the best part of his day, and it absolutely floored me. It certainly made slogging through the mud up a hill in the rain more than worth it.

WOW: What a heartwarming moment. Thanks so much for chatting with us today, Mary Elizabeth! Before you go, do you have any tips for our readers who may be thinking about entering writing contests?

Mary Elizabeth: Don't think about it too long or the deadline will pass. And you should definitely enter. Enter as many contests as you can afford to. The more you get recognized for your work, the better it looks in your query letter when you're trying to get published. Also, each time you enter teaches you a lot, especially if the contest offers a professional critique. Pay close attention to the contest rules and to what kinds of stories have won in the past. Give it your best shot, but don't let yourself get too emotionally invested--if you don't win, move on to the next one. Don't get discouraged! Keep writing!