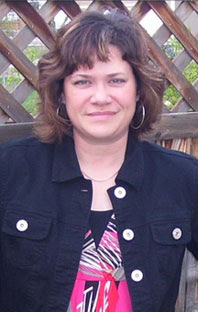 Kelly Thompson has been writing non-fiction for over 20 years, working as a reporter, news editor, commercial copywriter, and in government publications. She recently decided to try her hand at fiction; this is her first writing contest and she is honored to have made it to the Top 10. Whether reading or writing, she looks for a story with sharp characters, smart dialogue, and a good twist. Her fiction has appeared in River Life, and is currently looking for other publications to grace. Her recent writing projects include a nearly completed screenplay and a novel that is patiently awaiting edits. In her non-writing hours, she stays busy doing a weekly radio show, reading, camping, shooting pool, and spending time with family and friends.

WOW: Congratulations on placing as one of the Runners Up in our Winter 2010 Flash Fiction Contest! How do you feel?

Kelly: Thank you! I'm thrilled and honored to have been chosen as a runner-up, and I'm very appreciative of the positive response to my story. After reading the other Top 10 stories, I definitely feel that I'm in good writing company. The experience has helped to reaffirm my commitment to my writing. Thank you, WOW, for making these opportunities possible.

WOW: You’re welcome, and we love your reaction! You mentioned in your bio that the WOW! contest was the first writing contest you’ve ever entered. What made you decide to do it?

Kelly: Although I've been writing non-fiction for a long time, I'm fairly new to fiction writing, especially flash fiction. I have a group of family and friends that read my work and they've been very supportive and encouraging but sometimes because they want me to succeed, they're not the most objective of critics. I felt it was important to get my writing out to a broader audience, and see how I fared against other writers. I read some of the winning entries from past WOW contests and I was impressed with the variety of the submissions, as well as the diverse experiences of the writers. I liked that the Winter 2010 Flash Fiction Contest was an open prompt so I could write virtually anything. After years of assignment work, it was a nice change to tell a story I wanted to tell, instead of being told what to write about. I was surprised and excited to make it to the Top 100 and blown away to make the Top 10 my first time out. Entering the contest was definitely a good move!

WOW: Can you tell us what encouraged the idea behind your story, Meet Me at Dorsky’s?

Kelly: I was intrigued by the thought that sometimes the hardest people to talk to about what's going on in your life are the people you're closest to, and the way you talk to them can determine how they react to the news. Add to that the complexity of family relationships and the desire for acceptance, and you've pretty much got the gist behind "Dorsky's". When I write, I strive to create strong characters who really have something to say and are direct in how they say it. And I personally enjoy stories that have a good twist, whether it's a subtle one that you can sort of see coming or one that springs up when you don't expect it. In "Meet Me at Dorsky's", David has an important announcement to make and chooses a unique way to make it. And by doing so, his sisters don't have time to react negatively or positively; they just react.

WOW: It was a fun story that ended up packing a real punch. You've also completed a novel and “nearly completed” a screenplay. How do you fit such big goals into a busy life?

Kelly: I never sleep! I wrote the novel and the now-completed screenplay through writing challenges sponsored by the Office of Letters and Light. Both were month-long challenges: National Novel Writing Month in which you have 30 days to write a minimum 50,000 word novel, and Script Frenzy which gives you 30 days to write a 100-page television script, screenplay, stage play, etc. Having worked in and with the media for many years, I'm a person who performs better under a deadline. They were great writing exercises because to meet the word and page goals, you're really stretching your imagination for any idea or character or scenario that might work. Initially, you don't discard anything but by the time you're finished, you weed out what works and what doesn't. Because the challenges only last for 30 days, you have to make the conscious effort to sit down and write, even if you've had a long day at work or family commitments or other things that need to get done. I did a lot of writing in the middle of the night and early mornings because that's the only free time I had to do it. It was totally worth it; I'm already thinking ahead to my second novel which I plan to write during this year's challenge in November.

WOW: Another thing that must keep you busy is your weekly radio show. What’s that like? It sounds like it could be fun!

Kelly: It's a lot of fun! I got my first radio job nearly 25 years ago and have been with my current radio station for 20 years. During that time, I've done everything from being a news director to selling advertising to writing radio commercials to being an on-air announcer. I do radio as a part-time job now, and have had "The Kelly Thompson Show" for 11 years. I love radio because it's always different and it's so spontaneous; you never know what a caller or interviewee is going to say or what big story or event is going to break while you're on the air. Some of my listeners have been with me the whole 20 years so when I flip on that mic, I feel like I'm spending 4-1/2 hours with my friends, playing our favorite music and talking about anything and everything. I hope to still be doing it for a long time to come.

WOW: It’s been a pleasure getting to know you, Kelly. One final question: If there was one bit of advice you could pass on to other aspiring writers, what would it be?

Kelly: Don't get discouraged. Realize that just because one critic or reader or editor doesn't like your work, that doesn't mean it's not worthy of being read. Like anything, reading is a matter of taste and opinion - what one person doesn't like, another person may think is fantastic. Stay organized, keep good notes, and if you think you've got a good idea, nurture it and see where it goes. The stories are out there; it's up to you to bring them to life.

For more information about our quarterly writing contest, visit:
http://www.wow-womenonwriting.com/contest.php