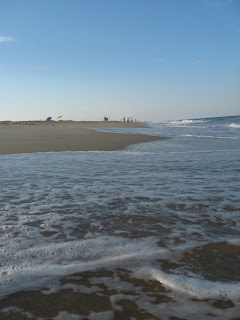 On this June day the sun is shining, birds are singing(no kidding, I’ve got a nest outside my window)but I have news for you. People go on vacation during the summer. I’m not talking about the “pack up the car we’re going to the beach for a week” kinds of vacations. I’m talking about simply “checking out” and getting less work done. Freelance writers are one of the most susceptible groups to this syndrome. I know this from a highly scientific survey that included a dozen people from my writers’ group. Recognize any of these excuses?

The kids are home from school and I can’t think.

I went to the pool/worked in the garden/got invited to a cookout.

I fill-in-the-blank yesterday so I slept late today.

And that ever popular:

It was just too hot!

I worried about my computer overheating so I had to turn it off.

Ironically, summer is one of the best times to query magazine editors. Why? Because everyone else is checking out for the summer! Yet, editors still need content. So if you’re still querying, competing with fewer writers since they’re off grilling hamburgers instead of composing queries, you have a better chance of landing an assignment or breaking into a market.

And weirdly, editors don’t seem to take a lot of vacations in the summer. I can’t be sure but it may be because they’re working on the big Christmas issue or December/January double issue. Most of the “I’ll be out of the office for a week.” emails I receive from magazine editors I work with regularly come around Easter or the end of August. So don’t pretend the entire publishing industry shuts down for three months.

Were you just whining? I know it’s summer. But this is your chance! Try using one of these tricks to keep your querying on target this summer.

1. Query Goal Set a goal of queries to send out each week. And meet your goal.

2. Hour Goal Determine how many hours you normally work a day(or week). Readjust your working hours. Instead of working during school hours(which is ideal when the kids are actually in school)switch to late night hours or divide it up to an hour here, an hour there—just so you still work the same total hours.

3. Work Days Dedicate certain days to work. As in “I will work on Tuesdays and Thursdays but save the other days for summer fun.” And when I say dedicate I mean it—no interruptions to read the paper, fold laundry, watch reruns of "Everybody Loves Raymond". Seriously put in an eight hour day and get some real work done.

4. New Surroundings Find a pen. Do you always write at your computer? That’s fine when you’re sitting your butt in the house away from the snow and ice. It’s time to find yourself a nice pen and tablet(I like legal pads)and take the show on the road. You can write while lounging by the pool, waiting for your daughter’s art class to be over, or in the car on the way to the amusement park(please let someone else drive!).

It’s summertime. This is your chance! All those other writers are standing in line for the roller coaster.