Take Your Book to School 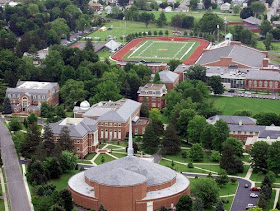 “No one visits bookstores anymore.” Someone said that to me during a recent book signing(a dreadfully sad little book signing)and I had to admit that for many people that’s true. As the author of one book with two more in the offing I have to ask myself, “If not bookstores—where?” Where do I go with my stacks of books, bookmarks, and black felt tip pen?

Think outside the box, they say. (Don’t they annoy you sometimes with their know-it-all attitude?) Well, I wasn’t exactly thinking outside the box recently—it was more like accidentally stumbling outside with a push from my daughter.

This spring for her college newspaper she wrote a story about the “Senior College” at her university The Institute for Lifelong Learning is a free event held for members of the local community that included workshops, speakers, etc. When she covered the event they had an author as a speaker so naturally she encouraged me to send the organizer an email. I wasn’t optimistic. I wasn’t a college professor, a well-known author, or even a local resident. But she was persistent so I sent off the email and forgot it—until last week.

Not only did they want me to speak, they wanted me to be the wrap up speaker at the end of the program which runs until April. There would be a lunch. There would be any technical equipment I needed(please, I get nervous around microphones). There would be a modest honorarium(which I considered generous for one hour’s work and the most I’d ever made for a speaking engagement). There would be an opportunity to sell my book afterwards. It would be held in the auditorium.

What? The auditorium is where they hold the university plays. Where they herd all the freshman parents during summer visitation to give them advice about shipping off your baby to school. It has a stage, red velvet curtains, a sound system that could boom my voice to every corner of the space. I had thought we would be in one of the small meeting rooms or maybe the library. The auditorium. Why?

We get 100+ attendees to our events the organizer told me. I acted cool but inside I was yelling OMG. That has to be three times larger than the biggest audience at any of my speaking engagements. One hundred people, all in one spot, hopefully talking about my book. Wow.

I had never considered the university’s Senior College as a speaking venue. Truthfully, I never even knew it existed. Visiting school websites, I’ve learned that Senior Programs are a regular event at many colleges and universities. I can’t even count the number of schools within an hour’s drive of my home. How about you?

Children’s book authors have been hitting the elementary school circuit for years. It’s time for those of us who write for adults to follow in their footsteps. Contact a college or university near you!
Jodi Webb at 4:39 AM
Share