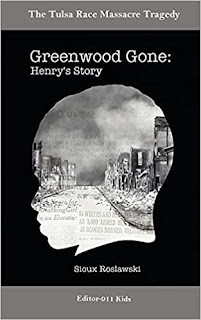 I recently was the featured author at a book club meeting. This was the third book club (that I know of) that read Greenwood Gone: Henry's Story, my novel. The other two were quite different. One was a church group, and my publisher, Margo Dill was a member; all the readers were white. The other was an all-Black group, and one of my friends, Astra, belonged to it.

The group that just met this week involved family... or at least in-laws. We met at my son's mother-in-law's home for a light dinner followed by da da dum: the book talk.

I learned some tidbits from each group, and I thought I'd share how I was schooled by the three groups.

How about you? What could you share either from the perspective of a reader or an author that would help me in the future? Fumbling authors (like me) want to know.
Sioux Roslawski is a middle-school teacher, a dog rescuer, and the proud author of Greenwood Gone: Henry's Story. You can see more of her writing by checking out her blog.
Sioux Roslawski at 6:08 AM
Share