Today we are here to talk with author Tal Valante about her story "Statistics."  Tal is one of the runners up of the Winter 2018 Flash Fiction contest.

Take the time to read Tal’s story, “Statistics,” before continuing on to her bio and her interview. 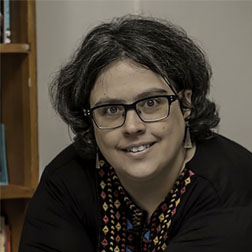 Tal Valante loves literature that packs a punch, whether she’s on the receiving or the delivering end. An avid reader and a slow writer since childhood, she enjoys crafting complex worlds for her characters and nailing just the right words to make their stories come across.

Besides her literary passion, Tal is a versatile programmer. And when literature meets technology in her workspace, interesting things are born. Tal is currently designing a new website builder made exclusively for writers, to take the frustration out of creating your online presence. Read more about Readership Pro. You’ll love it.

Between programming sprees, writing sessions, and managing a team of three cats, life is never dull. Connect with Tal over at LinkedIn. She’d love to hear from you!

WOW: The common wisdom is that we put a bit of ourselves into each story we write. Where are you to be found in "Statistics"?

Tal: I’m from Israel, and I’ve lived through three wars that I remember (and several wide-scale military operations). During one operation in 2014, in Tel Aviv, I was indeed caught in the open when the air strike sirens sounded. It was blood-curdling. You have nowhere to go and nothing to do except hope that statistics are on your side. Later I learned that on that occasion, a large piece of missile hit the street where I lived, several hundred meters from my apartment.

WOW:  This is such a personal story for you.  How does it illustrate your world view.

Tal: I’m a firm believer that most people want to live and let live. People with personal interests on either side of this confrontation make the vast majority suffer. They teach pointless hate that haunts us generation after generation. I wanted to show that for some people, that hate is not inherent. They can see past it to the common humanity. I’m counting on these people to create a better future for all of us.

WOW: Your character definitely came across as someone who was willing to live and let live. There is so much that you leave out of this story. We don’t know the character’s name or age or what her people and the Arashi are fighting about. How do you decide which details to include?

Tal: I leave out a lot of details because they’re not important. It could be anyone on either side. It’s about two people who are trapped in a battle they never wanted, who happen to meet under a great threat to their lives. All the rest is irrelevant.

WOW: How did this story change throughout the rewrite process?

Tal: I only did one rewrite, to be honest, and the story changed in very subtle ways: weeding out some weak words, choosing slightly different verbs.

WOW: Writing slow definitely works for you. What advice do you have for readers who have never attempted flash fiction?

Tal: Flash fiction is about a few scenes with the power to touch you emotionally. Don’t pack your story with big facts. Pack it with small details, little insights, and sensitive cues. It’s tempting to tell in flash fiction, because telling is faster, and the word limit is super tight. Resist that temptation. Show how the macro lives in each micro moment.

Thanks for reading, everyone, and thanks to Angela & Team for hosting this wonderful event!

WOW:  Thank you, Tal.  It is so hard for me to imagine writing about something so scary and so personal.  Thank you for showing us how to use life to inspire fiction.