When I read Wicked Good, the novel Joanne Lewis wrote with her sister Amy Lewis Faircloth, I was instantly hooked. Not only did I love the book but all my friends thought my son and I were the models for the book’s cover. Something fun like that made me want to follow Joanne’s budding writing career and when she came out with a mystery, Make Your Own Luck, I couldn’t wait to read it. Joanne took the time to send me an e-copy of her book and answer a few questions about her latest book. Thanks, Joanne! 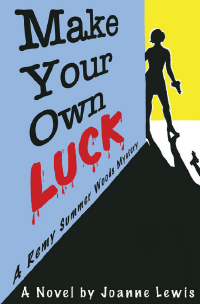 Make Your Own Luck: A Remy Summer Woods Mystery

You can find Make Your Own Luck on Joanne’s website, Amazon, Barnes & Noble, and your local independent bookstores.

Review:
Remy Summer Woods is a lawyer because her father is a lawyer—a very successful and famous lawyer. Just as Remy’s plotting her escape from the halls of justice she runs across the only case that could convince her to stay: Bonita Pickney, a 13-year-old girl who confesses to murdering her father and insists that they put her in jail as soon as possible. Remy is fascinated by this unlikely murderer and it doesn’t hurt that her father absolutely forbids her to become involved in the case. Soon Remy finds herself kicked out of her father’s firm and rocketing around Florida trying to unravel the circumstances that led to the murder with an unlikely group of helpers that include her drug addicted brother, an aging hippie/dinner owner, a mobster, and a cop.

Remy isn’t the only one “rocketing.” That’s the perfect word to describe this book. The characters are driven to discover the truth and, as a reader, I was driven to finish this book. Happily, it was never predictable. I was constantly saying, “I didn’t see that coming!” I also enjoyed the fact that there were no clear cut good guys and bad guys. You were constantly guessing about people’s motives which made pinpointing the murderer all the more challenging.

Although I enjoyed the mystery, the characters were also well written. I’d like to see more of Remy’s struggle to decide what type of life she wants, how she’ll deal with her father and I welcome more appearances by her crazy family and friends. I look forward to the next Remy Summer Woods book.

WOW: Wicked Good, that you co-authored with your sister Amy Lewis Faircloth, was a slower paced story that focused more on the characters while Make Your Own Luck (MYOL) seems more fast-paced, ripped from the headlines. Which do you prefer to focus on: characters or plot? 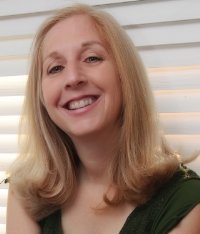 Joanne: I prefer focusing on character-driven plots. MYOL is a murder mystery, which is deliberately fast paced to fit with the genre so, you’re right, it’s plot driven. But I hoped to add depth to the characters in order to make it different from a typical murder mystery.

WOW: Like you, the main character of MYOL—Remy Summer Woods—is a Florida lawyer. Do you feel Remy is a reflection of you or is it a coincidence? What came first...did you develop the character Remy or come up with the plot line for the crime she investigates? How much of the book is based in real life?

Joanne: Remy is a compilation of my best friend, Debi, and myself. We are both lawyers and both love to do things that are creative. While I am a writer, Debi is an artist. She actually designed the cover to the novel. So, Remy is a reflection of both of us.

The first idea I had for the novel was to write a murder mystery featuring a young attorney. I then developed the character of Remy, stealing parts of her from my life and from Debi’s life. From there, the plot developed. It takes me about 3 years to write a book from the first draft until the final re-write (about 20 drafts later) that it’s hard for me to remember what came first but I know I outlined Remy’s characteristics before I started writing the novel.

Very little of the book is based on real life. The only things that I would say are based on real life is the setting and the fact that Remy wants to pursue her love of art rather than be an attorney. I think many attorneys want to be doing something else!

WOW: I think many of us feel that way about our “day job”! So will we be seeing more of Remy’s struggle to balance art and the law?

Joanne: Yes, Make Your Own Luck is the first book in a series. The series will follow Remy’s life wherever it takes her. In book two, called Live Your Own Life (LYOL), which is in the very early stages, she is still struggling with her desires to go to art school and feels trapped in the practice of law since she needs to make a living. I am hoping for a 2014 release but that might be overly ambitious.

WOW: But will there be anything else to look forward to before 2014?

Joanne: The next book I will publish is called The Lantern, a Renaissance mystery. The genre is historical fiction and it will come out in November 2012. It tells the story of a modern day woman who seeks to discover the identity of a girl who competed to build the lantern on top of Brunelleschi’s dome in 15th Century Florence, Italy.

In 2013, I hope to release The Forbidden Room, a stand alone murder mystery, and Michelangelo & the Morgue, a historical novel.

I love working between the two genres: murder mystery and historical fiction. I will probably alternate between the two. As I am obsessed with the Italian Renaissance, I would love to write a non-fiction book involving something about that period.

WOW: You make us all sound like laze-a-beds with all these projects! MYOL is a big change from Wicked Good because it’s a solo act. Can you compare the experience of co-authoring to solo authoring a book?

Joanne: What a great question. There definitely is a lot of camaraderie co-authoring a novel, especially with your sister! I’ve written many books alone and ultimately writing is a solitary profession. I enjoy the solitude when I write with my dog on my desk and my kittens on my lap. However, while it is freeing to have the final say, I do miss bouncing ideas off of Amy. All in all, writing solo and with Amy are both great experiences.

The biggest benefit of co-authoring a novel is when there is criticism, it’s great to be able to talk it over with Amy or laugh it off, whichever is appropriate.

Amy still plays a part in my writing. She is a great critiquer and she knows grammar a lot better than I do.

WOW: As a lawyer, your life must be jam-packed. Could you tell us how you added writing to your life? When did you begin writing? Where do your ideas come from?

Joanne: I am very fortunate to be self-employed. I work as a family mediator and as a guardian ad litem where I represent children in court. I make my own schedule but I rarely turn down a paying job! When I am not working as a lawyer, I am writing. Some weeks that means I get to be a writer a lot. Other weeks, not very much. When I can write, I do. When I can’t, I think about when I will write again but try not to pressure myself too much.

I began writing when I was 8 years old. I wrote a book on the weather and it was put in my elementary school library. I was hooked!

My ideas come from many different places. LYOL, as it stands now, deals with the issue of race relations, which Remy gets caught in the middle of. I took this idea from the Trayvon Martin-George Zimmerman incident in Sanford, Florida. In LYOL, Remy has taken a job as a prosecutor since she thinks it will give her more time to paint. Unfortunately for her, she is assigned to investigate a very heated situation so—as in MYOL—she feels frustrated that she doesn’t have enough time to paint. That part comes from my real life—I often feel frustrated that I don’t have enough time to write.

WOW: So familiar to all of us…tell us a bit about your writing schedule. Do you write daily? Write outlines? Stick to one project or work on several projects at once? Have a group of beta readers?

Joanne: I do not have a writing schedule. I do not write everyday, although I try to. I do not write outlines. Everything I write I store in my head. Sometimes I take notes, but that’s not typical. I do have a group of beta readers that include my mother, my sister, my father, my stepmother and some friends. I also have an editor. I only give him the manuscript when I think it’s finished. Of course, when I get it back from him I usually still have a long way to go!

WOW: If you could tell us one important lesson you learned from Wicked Good to MYOL, what was it?

Joanne: I learned about the publishing industry, more specifically about marketing and how much time it takes to market my novels and how hard it is to get noticed as a writer. I learned that if writing isn’t a labor of love, don’t do it! Sorry, that’s two lessons.

WOW: We’ll call it a two-for-one deal. We’re always happy to get as much advice as we can.