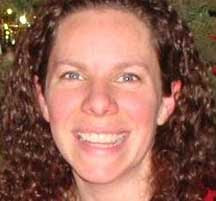 Kimberly's adventures of living alone in a hut in the middle of a Costa Rican rainforest for two years, bike riding throughout Japan, conducting research on tropical reforestation, and moving frequently as a wife of a Navy officer certainly fill her carpetbag full of experiences she draws upon in her writing. But it wasn't until she became a mother that the true adventure began. After winning 1st place in a Mom Writer's Literary Magazine writing contest, Kimberly realized one of her writing passions is literary essays on motherhood and writing. In addition to maintaining a blog on this topic, Zook Book Nook, Kimberly is a stay-at-home mom who is working on writing her first young adult novel, children's picture books and articles, and more essays on motherhood and writing. She and her husband currently live on the east coast, where they are expecting their second daughter to be born any day!
If you haven't had the opportunity to read Kimberly's story, Elements, head over to the winner's page.
WOW!: Congratulations, Kimberly! Elements offers a unique analogy by comparing chemical elements to a relationship. How did you decide to combine the use of chemical elements in your story?
Kimberly: As a writer, I find the use of symbols in writing challenging yet thought-provoking. I knew the characters and plot of this story before the idea of chemical elements popped into my head. As I thought about each character and what their personality represented, the idea of using chemical elements as symbols for each character came to mind since the narrator is a chemist. I think symbols add to the imagery of a story, and chemical elements paints a unique type of picture for each character.

WOW: It certainly does! What is the symbolism of mercury, magnesium, and manganese? What's the relationship between the three elements?
Kimberly: Science uses order and organization to facilitate our ability to communicate. In my story, I used these three chemical elements to help organize the story around "M" chemical elements that are commonly known. Each chemical element has properties that also describe the characters' personalities: Raul's smooth way of sliding into the narrator's life is like quicksilver (the liquid state of mercury), but he also adds a dangerous volatile state to the relationship; Raul's mother is portrayed as brittle and hard, which is characteristic of manganese; and magnesium seemed like the perfect element to represent a child who is light yet strong since it is an element found in a supernova star as well as the human body.

WOW: Fascinating! It's interesting how people certainly can resemble the characteristics of a chemical element. You've had the opportunity to live abroad. How did your experience living in Costa Rica play into this story's formation?
Kimberly: While living in the rainforest I began to understand the essential elemental basis of life and how it connects us to everything found in nature. From chemical elements to DNA to the complexity of a body struggling to survive, we're all related with all forms of life. This understanding is incorporated into my writing in many ways, and became the backbone of how I formed this story. In addition, I dated a man from Nicaragua for some time and learned a lot from this experience about the challenges of a relationship built from different cultural backgrounds. His family made me feel like an outsider, which eventually affected our relationship. But I wanted to also express the innocent existence of love and compassion found at the core of a relationship, so I chose to use a child to bring that out in the story.

WOW: That's so true! Children definitely bring out love and compassion in a relationship. You have a new addition to your family. How do you balance family time with writing?
Kimberly: I like this question, because I just gave birth to my second daughter! As a stay-at-home mom I've learned that setting priorities is the key to balancing family time with writing. It's important to me that my children and husband come first, but I personally need time to write to stay healthy and happy mentally, physically, and spiritually. With a toddler and newborn now in my life, I knew my time for writing would become even more limited, so I made a few small goals for myself: (1) write every day if even for only 5 minutes, (2) use my blog as a writing journal, and (3) take a writing course online. Although I do have manuscripts that I'm working on as well, these three goals are ones I keep up with daily because they are manageable and still allow me the quality and quantity of time I want to have with my family. The online course is structured and an investment, so I knew this commitment would not be one I would break and required a set time each week to write. It starts this week, so I'm excited to begin the course!

WOW: Sounds like you have established a great routine! That's an important step for all writers. You write a lot of literary essays. What do you see as the primary difference between the literary essay and the short story forms?
Kimberly: Good question! When I approach writing a literary essay I think about a particular concept on a philosophical level. I then spin out from the philosophical idea to tangible experiences, objects, and images that relate to the theme or concept. The seed of a short story starts out differently for me. I first imagine a character or an event and expand outward from there, developing a plot, a setting, a climax, and an ending that all tie in with the initial character or event that first came to mind.

WOW: Thanks for sharing how you structure a short story. Not only do you write essays, but you recently ventured into the blogosphere.What goals have you established for your blog? What demographic are you hoping to connect with? And finally, what type of information should readers expect?
Kimberly: The theme of my blog is "Crafting motherhood and writing together in the same pen stroke." In July 2007 I became a mom for the first time, and by April 2008 I realized I wanted to share my ideas and experiences as a writer and mother with others. The central goal of Zook Book Nook is to think outside the box about the relationship between writing and parenting. I take my daily experiences as a mother and think about how they relate to writing. In so doing, I hope this approach to blogging makes me a better writer and mother. I've found two types of audiences for my blog: some readers are mothers who blog about being a mom and some readers are writers who blog about being a writer. I like having the two different groups of readers, because we all learn from each other. When readers come to my blog I hope the daily blog entries I write will leave them with something new to think about in terms of being a parent as well as a writer.

WOW: Great idea! Good luck with that project! I'm sure many parents who are also writers will relate! You are a contest veteran. Any advice to writers who have never entered a contest?
Kimberly: I have been fortunate to have two contest writing pieces awarded, but I'm far from being very experienced as a contestant and winner. The only advice I feel I can give is about the approach to take with contests since I'm still in the early stage of entering various writing contests. When it comes to contests, I find myself unusually excited about writing a piece to enter, because I feel like all of the writers are using their creative minds to pool together different ideas or twists on writing prompts or topics. I ask myself what can I offer that is unique and will give the readers a new idea of how to approach the writing prompt or topic. If there is no writing prompt, then I think about the hosting organization's mission or focus and how my story my add to their mission yet give off a sparkle of its own. This approach makes me feel like I am writing with the other contestants instead of in competition with since I hope my piece of writing will give them something new to think about when it comes to writing. Well, I guess that's a lot of advice from someone who said I shouldn't give much!

WOW: LOL! You offer a lot of practical ideas for anyone interesting in entering writing contests. Any future projects you'd like to share with readers? What are you working on now?
Kimberly: My favorite project is a Young Adult novel I've been writing that incorporates my experiences of living in the rainforest. The focus of the novel is about a young man of mixed cultural backgrounds and the challenges he faces as he tries to find his place in this world. I hope this book will reach teens who struggle with connecting to different cultural groups and nature.

WOW: Your YA novel sounds quite interesting. Finding a place to fit in can be extremely difficult. Thanks for talking about your story and your writing experiences.
Kimberly: Thank you! I've enjoyed answering these questions, and I appreciate the opportunities WOW! has given me!
LuAnn Schindler at 6:00 AM
Share